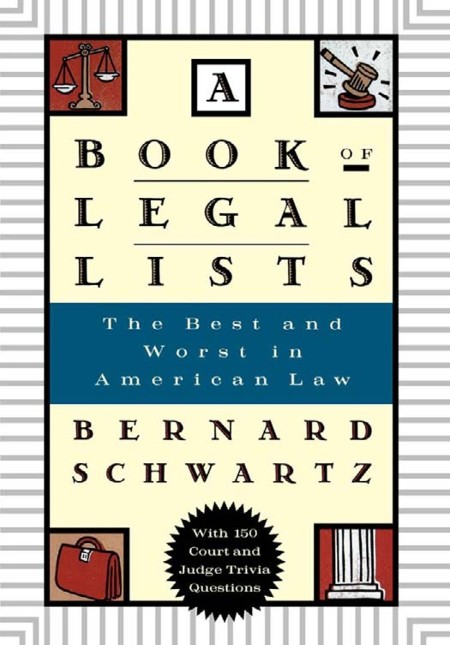 Who are the top ten greatest Supreme Court Justices of all time? Who are the worst ten? Which Supreme Court decision helped lead to the Civil War? What are the ten greatest and worst Supreme Court decisions? What are the ten best courtroom movies? Who was the last to use the Supreme Court spittoon? Who was the first Justice to wear trousers beneath his Supreme Court robes?
From John Marshall, the greatest Supreme Court Justice, to Alfred Moore, one of the worst, Bernard Schwartz's A Book of Legal Lists--the first ever compiled--provides the Ten Bests and Worsts in American law (and also includes answers to 150 trivia questions about the legal world). The lists include the greatest dissents and Supreme Court "might have beens;" greatest non-Supreme Court judges (Lemuel Shaw, number one on the Greatest list, played a prominent role in recasting common law into an American mold); greatest and worst non-Supreme Court decisions; greatest law books; lawyers (including Alexander Hamilton, Clarence Darrow "Attorney for the Damned", and Abraham Lincoln); trials; and greatest legal motion pictures. Each list entry has a short essay by Schwartz explaining why it is a best or a worst, and it is in these essays that we gain a wealth of information about the legal world. We learn, for instance, that Sherman Minton, number ten on the Worst Supreme Court Justices list, was such a nonentity that he may be best remembered as the last to use the spittoon provided for each Justice behind the bench. Before he became Chief Justice, William H. Rehnquist was known for playing Trivial Pursuit on the bench, Oliver Wendell Holmes wrote 873 opinions for the Court (the most in its history), and Roger Brooke Taney, number ten on the Greatest Supreme Court Justices list, was the first Chief Justice to wear trousers beneath his robes (his predecessors had always given judgment in knee breeches).
Stretching back to the early 1700s, the law and the judges who interpret it have maintained a steady presence in our lives--sometimes for better, sometimes for worse. From disappointments like Plessy v. Ferguson (number two on the Ten Worst Supreme Court Decisions list), which gave the lie to the American ideal "that all men are created equal," to lesser known but no less important decisions such as the 1933 United States v. One Book Called "Ulysses", (number nine on the Ten Greatest Non-Supreme Court Decisions) the landmark First Amendment case that eased the law governing censorship, Bernard Schwartz provides legal experts and non-experts alike with entertaining information in a format that can be found nowhere else.
Category:Legal Reference, United States Judicial Branch, Courts & Law