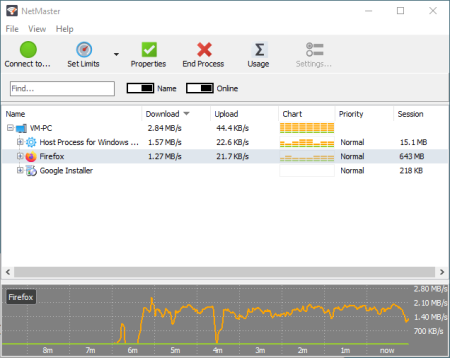 An easy to use tool for monitoring and controlling Internet usage of each application.
Watch the apps using your Internet in real-, set limits to their bandwidth, prioritise important applications, restrict less important programs, and block the ones you don't trust. Get detailed usage reports, optimise your data consumption, and achieve better privacy and security.
NetMaster is a modern Internet connection monitoring tool. It lets you watch the apps using your Internet in real- and control their access. Bandwidth-sensitive applications like voice calls, videos or games can be prioritised. Less important applications like software updates, file s or cloud backups can be restricted to make sure they don't occupy your entire connection. Finally, undesirable applications can be blocked from Internet access, giving you better privacy and security.

Comprehensive usage reports for any period.

Capable of excluding LAN traffic and handling up to 1 Gbps speed.

Built atop the Windows Filtering Platform and fully supports Windows 7 to Windows 10.