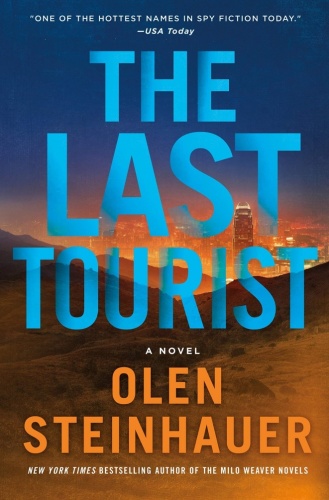 New York Times bestselling author Olen Steinhauer brings back Milo Weaver in The Last Tourist.In Olen Steinhauer's bestseller An American Spy, reluctant CIA agent Milo Weaver thought he had finally put "Tourists"вЂ•CIA-trained assassinsвЂ•to bed.
A decade later, Milo is hiding out in Western Sahara when a young CIA analyst arrives to question him about a series of suspicious deaths and terrorist chatter linked to him.
Their conversation is soon interrupted by a new breed of Tourists intent on killing them both, forcing them to run.
As he tells his story, Milo is joined by colleagues and enemies from his long history in the world of intelligence, and the young analyst wonders what to believe. He wonders, too, if he'll survive this encounter.
After three standalone novels, Olen Steinhauer returns to the series that made him a New York Times bestseller. **
Review
Advance Praise for The Last Tourist
"Like John le CarrГ©'s Agent Running in the Field (2019), Steinhauer pits a disenchanted agent, an ideologue no more, against the new evil empire, multinational corporations for whom "money kno no borders." It's not a fair fight, but Milo is a hell of a counterpuncher, and we love rooting for him." вЂ• Booklist, Starred Review
Praise for Olen Steinhauer and the Milo Weaver Novels
"[Milo Weaver's] company is at least as valuable to the series' appeal as is his flair for international trickery." вЂ•Janet Maslin, The New York Times
"Olen Steinhauer's Milo Weaver novels are must-reads for lovers of the genre." вЂ•The Washington Post
"Like le CarrГ©'s George Smiley, Weaver is a richly imagined creation with a scarred psyche and a complex back story that elevates him above the status of run-of-the-mill world-weary spook." вЂ•The New York Times Book Review
"Stunning . . . Readers are irresistibly drawn into Weaver's dogged struggle to unravel a complicated game of cat and mouse . . . Steinhauer is at the top of his gameвЂ•but when isn't he?" вЂ•USA Today on An American Spy
"The Nearest Exit should take its place among the best of the spy thrillers." вЂ•Associated Press
"Here's the best spy novel I've ever read that wasn't written by John le CarrГ©." вЂ•Stephen King, Entertainment Weekly, on The Tourist

About the Author
Olen Steinhauer is a New York Times bestselling author, a Dashiell Hammett Award winner, a two-time Edgar Award finalist, and has also been nominated for the Anthony, Ian Fleming Steel Dagger, Ellis Peters Historical Dagger, Macavity, and Barry awards. He is also the creator of the Epix TV series Berlin Station. He was raised in Virginia, and now divides his time between New York and Budapest.