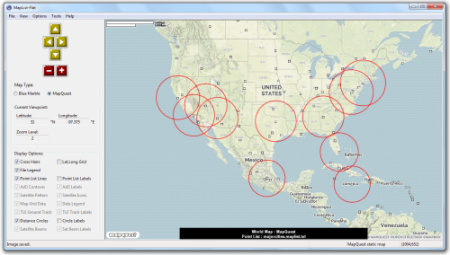 MapList-Flat is an easy to use windows program to present simple GIS data, and map grid data on a flat world map.
This is a sister program to MapList-Globe, which does the same job, but on a 3D world globe instead of a flat map.
Primarily intended for mapping data produced by other Gunamoi Software applications in MapList (*.maplist) and Map Grid (*.warray) files, this application can also load and display limited information from standard GPX, GeoJSON and KML map information files. Additional functions include the ability to plot satellite pointing angles (azimuth and elevation) on a map for a satellite located at any latitude, longitude or altitude; as well as the ability to draw multiple circles on the map at a fixed distance from designated centre points. Although not of much use to most people, MapList-Flat can also plot legacy satellite pattern (*.satpat) files from our old SatBeam program; or draw elliptical (or circular) satellite beams from a specified GEO satellite location. MapList-Flat can also plot satellite orbit ground tracks from TLE orbit data files.
The primary map used by MapList-Flat is a NASA Blue Marble image, which can be zoomed and dragged around the screen to centre on any location. For registered users, MapList-Flat can also automatically load and use static background map images from MapQuest. This function requires a live internet connection to the static map images from MapQuest as they are required. The blue marble map display is a 'slippy map' that may be dragged around with the mouse, or moved using keyboard arrow keys. The MapQuest maps are static and must be individually ed from the MapQuest server, and so these cannot be dragged around. Changing the view centre location of the map in MapQuest mode is performed using the View Controls on the left hand side, or via the View Menu.
MapList-Flat uses the WGS84 standard latitude and longitude system. The primary Blue Marble map is a flat map with linear equirectangular projection of latitude and longitude. The MapQuest maps, like most web mapping systems, use a modified mercator projection. MapList-Flat automatically takes account of these differences when plotting data on the different map types.
Users may load alternate background map images, instead of the default Blue Marble, provided that they conform to the same equirectangular projection. Use of alternate maps with mercator projection is not currently supported.
Features :
Hi-res blue marble satellite flat map that can be easily moved or zoomed using the mouse, keyboard or on screen buttons.
Ability to load alternate map image files if available.
Function to load and display map points, lines and labels from a variety of input files, including MapList format, GPX format, GeoJSON format and KML format files.
Able to quickly zoom to any specified latitude, longitude view location, including a built-in list of major cities to choose from.
Able to quickly turn on and off display of various map features via check box controls on the main window.
Able to vary all of the colours, line widths, and labelling options via individual settings in the Options Menu.
Able to save the current map view to an image file at any time.
Pro features for registered users :
Function to load Map Grid Data from file and display on the map as a grid of coloured dots with contour lines, or as a field of direction arrows.
Able to vary contour scale, dot sizes, arrow colours, and legend position for map grid data display via settings in the Options Menu.
Function to load and display legacy SatBeam satellite pattern files, with option settings in the Options Menu.
Tool to display satellite pointing angles (azimuth and elevation) for any satellite latitude, longitude and altitude (not just geostationary), with full control of colours, line widths, and label options.
Tool to plot elliptical (or circular) satellite beams from a GEO satellite location onto the map.
Tool to load satellite orbit two-line elements (TLE) from a file and plot the satellite orbit ground track on the map.